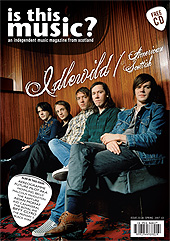 Last week’s two gig trip to Glasgow afforded me the rare luxury of a trawl around the record shops without two young children declaring their infinite boredom. Which meant that I was able to get the latest ‘Is This Music?‘, a Scottish music magazine.

Regrettably it seems that #25 is to be the last of the printed mags – for the time being at least.

Now I can claim some share of the responsibility for the economic circumstances surrounding the mag – I never bought it as often as I would have liked to because I was rarely in premises which sold it. But it is undoubtedly a sad loss.

The website will be developed as an alternative and the mag may reappear at some point but for now #25 is the last one.

To commemorate its demise, here are 2 songs. The first is their “theme song” from Teenage Fanclub’s ‘Bandwagonesque’ which, spooky coincidence, was produced by yesterday’s featured artist Don Fleming.

The second shows how old I’m getting because it features the son of one of TV21. Now rock was old enough that rock sprogs have been around pretty much since I started to listen to music. But for one of MY bands to have a son in a band is a reminder of advancing years too far!

The band is We Were Promised Jetpacks and guitarist Michael of the band is Ally from TV21’s lad. This track was featured on the free CD with ITM?24.

Teenage Fanclub – Is This Music

We Were promised Jetpacks – Crawling Home

You can buy Teenage Fanclub records everywhere including here although not as many of you as should have have done so.

As far as I know you can’t buy WWPJ records yet. But they do have a Myspace from which you can download 2 more songs including the excellent ‘Beggars Can’t Be Choosers’.