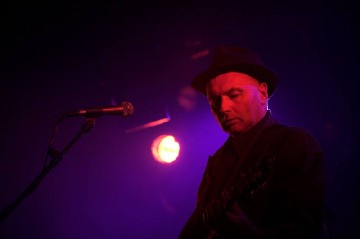 Twenty five years after their last single TV21 released new material via their Myspace site at the weekend.

It’s been a productive year in the studio for the band so far as the 3 tracks available for download follow hard on the heels of the 5 re-recorded tracks for the Future Revisited EP. What’s different about the latest tracks though is that two of the songs are brand new 21st century compositions.

‘Last Man Standing’ was first aired back in September last year at Cabaret Voltaire and it’s gone through a few changes since then both in terms of lyrics and arrangements. But the finished version is a triumph – a modern, anthemic rock song which sounds bigger than anything they’ve done before.

‘Look To The Sun’ is of more recent vintage with only a couple of live outings behind it but it ultimately follows a similar path to LMS although it has a deceptively haunting organ led intro. That doesn’t last long though as the song explodes into life. It’s a really good lyric too – Norman seems to be planning his own funeral arrangements. I think these 2 songs would make a cracking double A sided 7″.

The third track is a re-recorded version of single ‘Something’s Wrong’ and it’s a recording that finally unlocks the song’s potential. The original version, from their ‘A Thin Red Line’ LP, always had something but this version just sparkles in comparison. It’s clear that the band feel the same way as the song has only recently re-established itself in the live set.

It’s a busy week too gig-wise for TV21 as they play their first ever acoustic gig at Avalanche Records in Edinburgh on Thursday evening (23rd) at 5.30 pm. That’s followed up by an appearance at Rock The Rovers appearing at Harlem in Kirkcaldy at 5pm on Sunday (26th). Play ‘Tomorrow’ please guys!

Here’s one of the new tracks:

Buy ‘Future Revisited’ at Avalanche, through their Myspace or at the gigs.