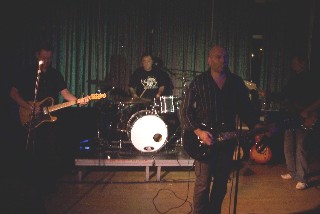 After the arena show the night before this, to be honest, was more my sort of gig. The attendance might only have been a hundredth of the SECC gig, but at least you could hear the bands properly.

The venue itself, a rugby club social club, was a little bit unusual and it was certainly a little off the beaten track. That may therefore have been a factor in a small-ish turnout which was a shame not just for the bands but for Alan the promoter. However what the audience may have lacked in numbers was more than made up for in enthusiasm.

Happily the low turnout didn’t affect the performances of either of the bands. I’d seen We Were Promised Jetpacks play with TV21 18 months ago and whilst stylistically this is clearly the same band they are noticeably more confident both in their performance and their songwriting. Their blueprint still largely features stop/start songs but within that template they’ve found more varied ways of making their point. Singer Adam typifies this best – his range of vocal delivery seems so much greater now.

They’re also relaxed enough to count the punters in both sections of an L-shaped room then take a call on a mobile between songs to direct friends to the venue! All in all it’s an enjoyable set and I hope I’ll be able to catch them again before too long.

Whilst the recent TV21 shows have been excellent without exception the nature of this show illustrates that the last year has been a slightly frustrating experience simply because all the gigs have been support slots of one kind of another. This therefore was a chance for the band to break out from their core set and spread their wings a bit. And they do this with the introduction of four “new” songs.

A couple, ’Rain’ and ‘Waiting For The Drop’ have both had previous 21st century outings but the version of ‘Rain’ in particular was streets ahead of the rather ragged version from May last year. Impassioned and powerful, this was the best vocal performance of the night from Norman, in fact maybe even of all the gigs I’ve seen over the last couple of years.

The biggest surprise though was the inclusion of ‘Through Different Eyes’, like ‘It’s Me’ another song which was only ever recorded for a radio session. On record it always sounded a bit like a b-side, however the interplay of the guitars gave it real energy and I’m really hoping that it will resurface again very soon.

‘Playing With Fire’ was another song resurrected for the first time and whilst it might not have been as tight as the rest of the set due to limited rehearsal, it fitted in perfectly as an encore.

Otherwise it was pretty much business as usual – and that is undeniably a good thing. Having apparently not played it at their Undertones support at the Garage, ‘Snakes and Ladders’ was back as the set opener and sounding as good as ever. In fact that can be said about all the familiar tunes from the last 12 months with perhaps ‘Something’s Wrong’, ‘It’s Me’ and another blinding version of ‘Tomorrow’ the highlights.

The only disappointment of the night is that no genuinely new material has been added to the set. But it’s a minor issue and I think the fact that I’ve now seen TV21 ten times in the last 2 years is a testament as to just how good these guys are right now.

TV21 play the Liquid Room, Edinburgh on 8th November with the Undertones. (Tickets). Their EP, Future Revisited is available through their Myspace.

We Were Promised Jetpacks play as part of 25 Band Weekender at the Doghouse, Dundee, on Saturday (3rd November) onstage at 5.00pm whilst they are also playing at Po Na Na in Edinburgh on 9th November (tickets) and Glasgow later on.

From WWPJ, here’s a cracking song from their EP given away at the gig:

All going to plan, more TV21 next week.

A few not very good photos (and a couple of ok ones) from the show here.