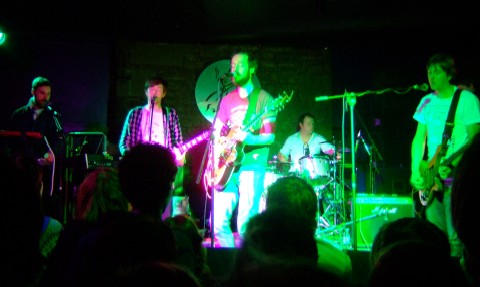 The Frightened Rabbit/Phantom Band double bill in Dundee looked too good to miss and I was glad that I’d bought a ticket in advance because when I turn up, not only is the show sold out but punters without tickets are being turned away in their droves.

The first band are on when I get in and I really need to find out who they were. So I can avoid them in future. They’re a tasteful yet unpleasant combination of mid 80s lounge and Coldplay, although they perhaps deserve bonus points (perhaps )for having a very un-rock line-up. But one of the songs features a trumpet line ripped in its entirety (apart from 1 note) from ‘Move On Up’. So not just horrible but also unoriginal.

The Phantom Band are on next and confirm my feelings about them from Aberdeen. If it doesn’t seem quite as exciting tonight that’s almost certainly due to the difference in relative alcohol consumption at the two shows.

‘Throwing Bones’ has a real feeling of abandon, ‘Crocodile’ is once again absolutely immense and ‘Lefthand Wave’ a suitable finale. The sound was pretty good too. Rather than leading to a sense of going through the motions, a year of solid touring seems to have left the Phantoms on the top of their game.

Regular readers may remember that ‘Midnight Organ Fight’ was my favourite LP of last year. Despite that, and the fact that the Vinyl Villain swears by Frightened Rabbit live, the couple of times I saw them live last year, they didn’t quite catch fire.

That turns out to be true of last night as well. The sound isn’t great but it’s pretty similar to last year’s shows which suggests that it’s what they’re aiming for. To these ears at least the addition of another member on stage hasn’t helped, rather it’s added to the clutter in the sound.

However somewhere around ‘The Twist’ it all starts to come together and, as ever, ‘Square 9’ is an thunderous finale. All in all the main set is a reminder of how many fine songs that they have.

It’s a bit disappointing that 12`months on from their last Dundee show the setlist is near identical to that show. Sure there’s a couple of new songs in there, but it’s structured in a very similar way and there are no surprises.

Nonetheless, despite my reservations, there’s definitely a real sense of momentum about FR at the moment. They write songs which people not only want so sing along to (Scott doesn’t even bother to sing the first verse of ‘Keep Yourself Warm’, the crowd do it for him) but which also feature those wordless hooks which encourage audience participation in the same way that the Arcade Fire did.

The new songs do nothing to dispel the notion that ,with their next LP, Frightened Rabbit could break very big indeed. ‘Nothing Like You’ in particular sounds like the most anthemic song the band have written so far.

And yet something about their approach makes me think that FR aren’t desperate to go overground quite yet. Time, and the new LP, will tell.

The video for the single: