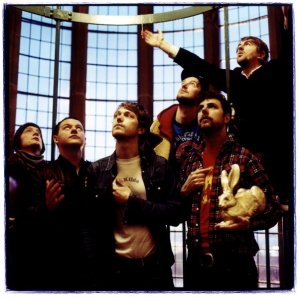 So I’m probably the last person to review the new Phantom Band LP ‘The Wants’ but that’s because I bought it and HMV delivered it on time rather than early. Bastards.

But, even though you probably don’t need another review of ‘The Wants’, you’re getting one because a) I’ve been listening to nothing else since Monday and b) I’ve been on about this band since yon time.

And ‘The Wants’ is both the same as debut ‘Checkmate Savage’ and yet different. The same because numerically the songs on both number 9. And you’re not going to listen to ‘The Wants’ and really think it’s anyone other than the Phantoms. I mean ‘Mr Natural’ is a close cousin of ‘Folk Song Oblivion’. A very close cousin.

But it’s different too as the new songs from the Edinburgh Edge show suggested. ‘Everybody Knows It’s True’ and ‘The None of One’ have no obvious counterparts on the debut whilst the likes of ‘Walls’ and ‘Goodnight Arrow’ suggest a previously hidden interest in the Flaming Lips’ ‘Soft Bulletin’.

There’s a different emphasis too with an electronica heartbeat pushed to the fore instead of Checkmate’s crunching guitars. That’s no more apparent than on ‘The None of One’ which on record  jumps from its sedate opening into swooping sequencers where once it might have led into howling guitars.

The lovely ballad ‘Come Away In The Dark’ is the most economical song on the record and, unlike ‘Island’  the stand-out equivalent on the last record, it clocks in at under 3 minutes and is none the worse for that.

But I’m going to finish on another similarity – like the first record ‘The Wants’ doesn’t give up its secrets easily – the range of the songs means that this is a record that is going to take some getting used to. But the first few listens suggest that it’s going to be worth the effort. (8/10)

A live version of ‘The None of One’:

And a short version of ‘A Glamour’ from last year: