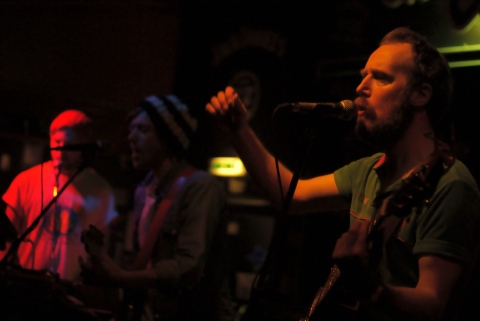 Quite why it’s taken so long for the Phantom Band to be asked to headline a Dundee show is something of a mystery. Although it’s probably the same reason I’ve ended up dabbling in promotions over the last couple of years.

But after a couple of support slots in the city with iLIKETRAINS and Frightened Rabbit, the Phantoms finally got their own show last night at the Doghouse.

Up first though were Pensioner who I quite enjoyed in a similar slot at the same venue last year. There’s a bit of a buzz building around them with their debut LP ‘Yearlings’ due out in May on Olive Grove Records. But, for whatever reason, they didn’t catch my interest as much this time around. Next time maybe. (Download a free track from ‘Yearlings’ here.)

Since first encountering Spare Snare last year (yeah, I know) I’ve started working my way through their discography but was still surprised to know the majority of their first set in Dundee in several years.

There was a degree of excitement in the room when they took to the stage, a feeling only heightened by the regular popping of flashes as the show was captured for posterity.

In my limited experience the band seem to explore the more accessible areas of their back catalogue live even if early on the electro clatter of ‘Zappa Is Sound’ from the last LP was included. But they followed that up with early indie hit ‘Super Slinky’ and by the time the lo-fi pop genius of ‘Bugs’ was played the band were fully in their stride. The set was concluded with ‘Spot The Difference’ and somewhere in there they also played a new song.

They don’t gig very often, which is a pity, but when they do you can guarantee a special occasion. In my limited experience. (Get their back catalogue here.)

It’s difficult to believe not much more than a year ago I was starting to feel a little blasé about seeing the Phantom Band live. But the last half dozen times I’ve seen them they’ve been consistently brilliant.

Last night was no exception undoubtedly helped by a monstrous sound which still kept everything in focus in the mix. It was not a night for the faint hearted.

For some reason the second songs on both LPs have been amongst my least favourite tracks yet both ‘Burial Sounds’ and ‘O’ are transformed in a live setting. Their inclusion therefore next to the two singles from the first LP right up front set a heady tone which the rest of the set lived up to.

There seemed to be less in the way of rearranging the tunes this time around, the notable exception being ‘A Glamour’ in which the extra percussion from Glasgow was sacrificed to make way for layers of thunderous guitars. Otherwise the versions of the songs were familiar from last year’s shows.

The main set was brought to a conclusion with the fantastic ‘Throwing Bones’ and a heavy ‘Left Hand Wave’ with’ Crocodile’ once again reserved for the encore. It may be their oldest tune (and as an instrumental atypical too) but it remains one of their best and there’s little to beat the climax of the songs in a live setting.

That was it, slightly shorter than the Oran Mor gig, with the omission of ‘Come Away in the Dark’ a particular disappointment.

Given that they’re just completing a massive tour in Glasgow tonight, it remains to be seen when they go back on the road. But their growing popularity (with the Edinburgh show at least  sold out) suggests it won’t be too long before you get the chance to see them again.

(If by some dreadful lapse in taste you don’t already own them, buy the Phantom Band’s two LPs here.)

Photos of all three acts from last night here.