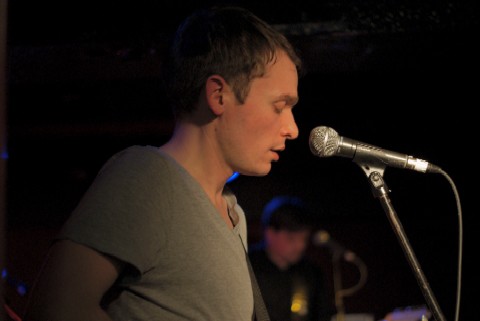 Thought it might be worth turning my attention forwards to 2012 having spent much of the last month or so looking back.

Let’s start with records I know that are definitely coming out this year.

Chemikal Underground will be releasing the next LP from Malcolm Middleton – the self titled Human Don’t Be Angry LP. (‘Midnight Noodles’ is apparently being reserved for an EP title now). At the moment there’s only an ‘early 2012’ from Malcolm himself but Chemikal are saying April – for now.

Field Music release their new LP ‘Plumb’ on 13th February. To promote the record they have 2 shows in Scotland, at the Picture House on February 6th and at Stereo in Glasgow on 18th. For a band that played Sneaky Pete’s the last time they were in Auld Reekie, the Picture House seems a major step up.

Meursault‘s eagerly anticipated third LP will be released on Song By Toad in June. Given the standard of songs they’ve been playing live in the last 12 months, this seems a ridiculously long time to have to wait!

The Twilight Sad release their third full length ‘No One Can Ever Know’ on 6th February. I have to admit that my expectations are far lower for the third after the second, but maybe it will turn out ok.

Surely 2012 will usher the debut LP from Cancel The Astronauts into the world? Late spring/early summer seems to be the likeliest date although the album should be preceded by a single, perhaps in March.

Birdhead should also be ready to unleash their debut LP at some point in the coming months as they’ve been recording songs over the festive period.

Expect also to see R.E.M.‘s final IRS release ‘Document’ get the deluxe treatment before the summer is out.

Not sure if they’ll get an album out but Vladimir are working towards the release of a second EP, probably on 10″, by the Spring.

From the definites let’s move onto the probables.

The record I’m most looking forward to at the moment is the next Throwing Muses LP. With a format busting 38 tracks, the record is being mixed at the moment so I’m guessing that an early summer release is possible but that an autumn schedule far more likely. Another tour to support it? Let’s hope so.

Not far behind that in anticipation would be the debut LP from Eagleowl. No formal recordings appeared in 2011, so hopefully these are being saved up for a long player some time in the not too distant future.

With a new EP released early in the New Year on Fence, 2012 should also see the release of the second Withered Hand LP – and not before time!

I believe that, after the digital single ‘I Am God’ release last year, Spare Snare are working on the follow-up to ‘Victor’ for release at some point this year. On a related note, Man Without Machines, the side project of Alan from the band, should also release their debut LP in the next 12 months.

It doesn’t seem too much of a stretch to imagine that the Phantom Band‘s third will appear by the end of the year since by the time the autumn comes round it will be 2 years since the release of ‘The Wants’.

Kid Canaveral also appear to be cracking on with LP number two as well so I’d be optimistic that that will see the light of day some time during the coming year.

It never pays to get too optimistic about when Grant Hart will release an LP but the existence of the ‘So Far From Heaven’ single gives some grounds for hoping that his ‘Paradise Lost’ influenced LP ‘The Argument’ will be with us before the year is out.

More speculatively the New Year may bring us a new record from Edinburgh School for the Deaf. Certainly they appear to have plenty of songs, given the demos that have appeared on Soundcloud recently, but would 2012 be too soon after ‘New Youth Bible’?

On my wish list for the coming 12 months would also be records from Lucas Renney, Sonic Youth, Bob Mould and Sophia although I’ve seen nothing to suggest that any of these are imminent.

How many of these records will show up in next year’s MPT Favourite records list?