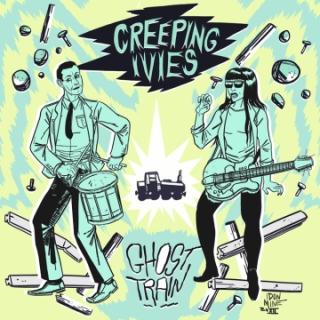 The new three song single from Dundee’s own wild rock ‘n’ roll duo is a treat indeed. Following on from their lovely ‘Rock ‘n’ Roll Party’ E.P. the sound this time around is a little fuller and more expansive but still sounds stripped down and raw, full of The Creeping Ivies trademark sound – jagged riffs combined with visceral rhythms and Becca’s holler coming together to provide a sound that is both sweet and nasty at the same time.

‘Ghost Train’ kicks things off with a nagging guitar riff and stomping drums propelling the song down some dark tracks. It’s part rollercoast ride, part night terrors with lines like

‘Well how did you know they’d be waiting for me?

Chugging along on a nightmare spree’

Before Becca howls ‘I sped into a tunnel / And I’ve never been the same.’

In person, Becca and Duncan are affable, smart and funny – as The Creeping Ivies they are capable of invoking darker demons but also, importantly, of having fun. ‘Ghost Train’ is a trashy B-Movie with a grim undertow and a neat guitar break and as you hurtle at full speed into the buffers you somehow don’t care, happy just to be taken along on the ride.

‘Don’t Cry’ comes on like The Velvet Underground being giving the the run-around by the femme fatale of their darkest nightmares. When Becca sings ‘Don’t you cry, cry,cry’ it’s an implicit threat not a gentle request. It’s got some cool guitar breakdowns and a cool groove.

If ‘Don’t Cry’ is The Creeping Ivies at their poppiest then ‘Chicken Voodoo Blues’ sees them at their most manic, rabble rousing best. Becca sounds positively unhinged as she yelps ‘I will die for Rock and Roll’ while Duncan beats the drums into a hole somewhere under the earth’s crust as the song lurches towards a thrilling, messy climax.

The Creeping Ivies channel the voodoo rhythms of early blues and rock ‘n’ roll, The Cramps knowing but sincere and affectionately sleazy take on the same influences, and the melodrama of the 60s girl-groups and roll it all up to produce an intoxicating brew all of their own making.

‘Ghost Train’ ratches things up a few extra notches in terms of the sound from their fine debut single. Both on record and live they are coming on leaps and bounds from their debut gig only last summer. I love this band and you really ought to as well.

‘Ghost Train’ can be downloaded for free from:

The Creeping Ivies play the Return of the Cool Cat Club this Saturday at Beat Generator Live in Dundee alongside the High Fevers and the Fnords. More info here.