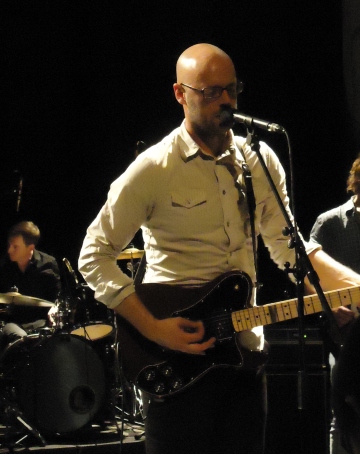 Is it really more than 3 weeks since the Meursault LP launch? Apparently so. Despite this, it’s only in the last few days that I’ve managed to get to grips with the LP sufficiently to write about it.

Backtrack first a little over 12 months when I witnessed an astonishing performance by the band at the Caves – largely based around songs for the third album. That raised expectations significantly for the record and the news that the album wouldn’t be released until this summer was a little frustrating.

Fortunately ‘Something for the Weakened’ has been worth the wait. Compared to its predecessor, the often harsh sounding ‘All Creatures Make Merry’, SFTW is a lush epic. Even the plaintive, apparently simple opening song ‘Thumb’ boasts some subtle strings.

But the zenith of the new approach is surely ‘Dearly Distracted’. The song starts off as a gentle folk lament but gradually swells with the introduction of what’s effectively a mini-orchestra before finally bursting into Technicolor with a skyscraping guitar solo.

Even on the uptempo tunes such as the wonderful single ‘Flittin’’ and surely potential future single ‘Dull Spark’ the rougher edges have been smoothed off. But this does nothing to lessen the impact of the material, in particular the subtle quiet/loud dynamic of ‘Settling’.

The piano features fairly prominently on a number of tracks from the short instrumental ‘Lightning Bolt’ to its sprightly role in the afore-mentioned ‘Dull Spark’.

The one thing that took me time to get used to was the re-recording of ‘Lament for a Teenage Millionaire’, placed fairly prominently in the middle of side 1. It took me a few listens to get over the fact that it is a re-recording and appreciate it for the gorgeous piece of work it is.

‘Something for the  Weakened’ is absolutely up there with the best records of the year. It’s a record that covers many different moods as befits a singer who can do everything from hushed, fragile to belligerent.

Thing is though, I don’t think it’s Meursault’s masterpiece because I wholeheartedly believe that that is still to come.

‘Something For The Weakened’ is available in all good record shops and online from Song, By Toad.

Meursault have 2 Scottish dates coming up – on the 15th August at Stereo in Glasgow (tickets) and at the Lemon Tree in Aberdeen on Saturday August 18th (tickets).

Listen to the single: