Many, many years ago I submitted a reader’s top 10 to Melody Maker – and it got printed.
Looking back it seems quite a naive selection – what would pretty much only qualify as a playlist these days – lacking breadth and a wider appreciation of all the music before and (understandably) since.
But at the time the music was pretty special to me (most of it still is). I don’t have the cutting to hand but the list included:
Echo & The Bunnymen – All That Jazz and Rescue; The Teardrop Explodes – Reward; Comsat Angels – Independence Day; The Sound – Heartland; U2 – Out of Control; TV21 – On The Run and Ideal Way of Life.
OK, that’s not 10. But you get the point.
The only Scottish band in that list was TV21 and the young Manic Pop Thrills would have been astonished at the notion 30 years later he would be putting on a show featuring TV21. But that’s what happening as the band will be playing A Brighter Beat on Sunday in Cupar.
On their reformation, TV21 were pretty much the first band I stalked on a regular basis and they have featured on here numerous times. But the gigs have been fewere in the last couple of years and my hope was that I could tempt them out of their recent inactivity – and I’m over the moon that I’ve managed that.
To celebrate the occasion then here’s a short interview with Norman and Ally ahead of the show (and an appearance the previous evening in Edinburgh with The Cathode Ray and The Ettes).
MPT – You’ve not played so much in the last 18 months – couple of years. Why’s that? How much do you miss it?
Ally: We decided some time ago that we didn’t want to just play any gig that came along. Norman’s done the odd show but as a band we’ve been quiet. Personally I do miss the gigs but finding the time to all get together to rehearse had been getting harder and harder.
Norman: Things got derailed a bit because of family issues that rightly had to take precedence and as a result we got out of the routine. So because we’re not rehearsing so often, it’s harder to work on new material and we don’t want to just keep gigging with the same set. I missed the gigs to begin with, especially as we’d done a couple of really good gigs in 2010 – one in London and the other at the Picture House in Edinburgh – and seemed to have really improved as a live act. 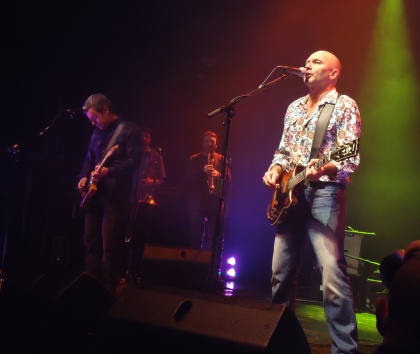 The HMV Picture House, December 2010 – with brass section!
MPT – As long as I’ve known you, you were talking about getting re-releasing ‘A Thin Red Line’. You finally managed that in March 2010 – a) how did you finally manage it, and b) what reception did it receive?
Ally: We were approached by a guy called John Reed who was representing Cherry Red who do a lot of re-issues on their Rev-Ola imprint. They weren’t interested in simply doing a reissue of the album but a compilation including our earlier Powbeat and singles.
Norman: We had hardly any press coverage, which was disappointing but sales have been pretty steady, probably selling as many as the original vinyl release
MPT – The first time I interviewed you, you basically weren’t too enthusiastic about ATRL (Norman’s exact quote was ‘Pretty poor really’!). Has the reissue changed your mind at all and how do you feel about it now?
Ally: Personally I still think it sounds ‘of its age’ but I’m proud of it and always glad to hear how much it was appreciated by people at the time. We still don’t do all the songs live, though we discussed trying to do it all at some point, but the 30th anniversary has passed!
Norman: It is great to hear what the album has meant to people, so that’s a real positive. Unfortunately I did most of the work transferring the tracks from analogue to digital, working from tapes and vinyl, and it was a very long slow process. As a result I still haven’t actually played the finished copy of the CD and it could be some time before I do! You’ll have to ask me this question again in five years’ time.
MPT – You’ve got one new song you’ve played at the last few shows – is there anything else in the works?
Ally: Nothing else at the moment. Again we’ve not been rehearsing together so it’s just not been happening.
Norman: I’ve been doing a lot of writing and recording but largely on my own but I’ve been firing off in all sorts of directions so I’m not sure whether the songs are a fit for the band, we’ll see…
MPT  – What would it take to get you back to more active duty as a band?
Ally: Well we’re still keen to do the right gigs when they come along so thanks Mike for asking us to do this one.
No problem, Ally! Hopefully there will be more of the right gigs in the New Year.
In the meantime, TV21 are playing ‘A Brighter Beat’ at Watt’s in Cupar on Sunday 11th November a show which also features the Bad Books, Sam Barber and the Outcasts, Cancel The Astronauts, Martin John Henry and Kid Canaveral.The show is a family friendly event which runs from 2pm until 9pm. Tickets are £10 in advance (£5 for Under 16s) from Watt’s, Avalanche in Edinburgh and Groucho’s in Dundee or online from Brown Paper Tickets.