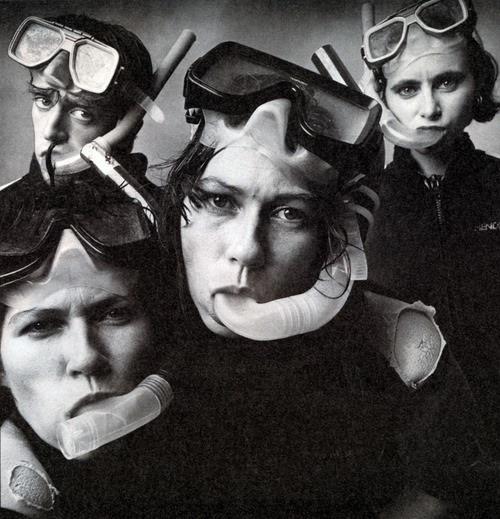 The twentieth anniversary of the Breeders’ ‘Last Splash’ is being marked in some style with a tour by the line-up that recorded the album and the re-issue of a deluxe version of the LP itself as ‘LSXX’.

Sadly, an outbreak of work related common sense means that I’m not going to be at tomorrow’s O2 ABC show (Monday 17th June) in Glasgow (where the Breeders will be supported by local heroes PAWS), but I have the recent re-issue to console myself.

When it came to choosing the version of the re-issue to purchase, common sense also prevailed. Tempting though the multiple vinyl package was, its price of a minimum of £70 was more than off-putting. So, I settled for the 3 CD reissue instead.

Let’s start with the main album itself. ‘Last Splash’ is not only the Breeders’ best selling LP but it’s also, without question, the best post Pixies album by any of its members.

It’s the best Breeders LP or two reasons. That’s down in large part to the strength of the record but also, importantly, it’s the one album that hasn’t been stifled by Kim’s favoured lo-fi production, lending it a scope that the likes of ‘Pod’ and ‘Mountain Battles’ lack.

For all that there are 7 or 8 classics on here, I feel that it stops a little short of being a complete classic. The reason for that is the more variable second side. But whilst the record undoubtedly bears some indications of being influenced by grunge it also retains a lightness of touch that grunge couldn’t deliver.

Disc 2 collects contemporary non-LP material in the shape of the E.P.s and a bundle of often prototype demos. This is where the vinyl package really comes into its own as the E.P.s are available on separate 10”s. Listening to them all gathered together on the CD however, the over-riding impression is that there’s a lot of variety but equally that the quality is very much up and down.

The final disc is a decent, if occasionally slightly scrappy, live recording from a Stockholm show which is bolstered by the addition of a BBC session (with 3 of the 4 songs not included in the live set). The inclusion of some ‘Pod’ material in the set is welcome but some slightly puzzling omissions lend it an incomplete feel. And some of the between song chat could happily have been discarded…

All things considered, ‘LSXX’ is a more than welcome reissue with the level of extras that should be standard for these releases. If it’s not quite true to say that this is all the Breeders you’d ever need, it’s certainly the best place to start.

The other day, Pixies announced that Kim has officially left the band. For my tuppenceworth, the band will be losing an essential element but many bands have continued without a key member without necessarily losing their entire character.

Presumably also this clears the way for a new Pixies record. However I have very mixed feelings about this. Ever since the last two LPs in the early 90’s I can’t say that I’ve been anticipating a sixth Pixies LP with any sort of excitement. I’m certain that any such record would do well commercially but creatively how likely is it that it will be anything better than the sort of retread that  ‘m b v’ turned into?