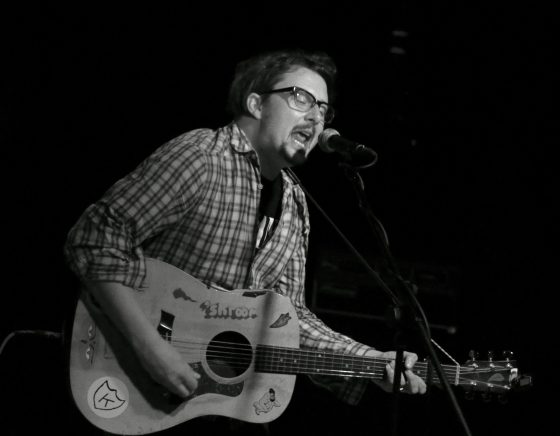 The bi-ennial Cupar Arts Festival is organising a couple of cracking gigs this year, and after previewing the FOUND/Kid Canaveral show last week with the help of Ziggy Campbell, today I’m turning my attention to Withered Hand.

Dan Willson and cohorts are playing a full band show at Elmwood College a fortnight tomorrow (Friday 11th October) before going on to a short UK jaunt. Ahead of the tour, MPT spoke to Dan about his new band, delays and the announcement of the long awaited second Withered Hand LP, due in 2014.

A combination of events had put Dan in good spirits ahead of our interview.

“I’m in unusually fine fettle. I just came back from a weekend in the highlands with my family. It was good to get away from everything.”

As mentioned above there’s  a full band tour imminent starting in Cupar. Dan’s no stranger to Fife from his regular performances for Fence but he thinks that the Cupar show will be special for a couple of reasons.

“I am excited to play there and more importantly to be able to play an all-ages show there. Jo Foster, who actually sang on ‘Good News’ years ago, is amazing so I am delighted she is playing a rare set in support because I am a fan of her music.”

There’s a slightly unfamiliar look to the new band so Dan introduced who’s going to be accompanying him around the UK.

“With the help of some great promoters who have supported WH over the years, I pulled together a band tour for October at relatively short notice when we realised most of the band had some availability that overlapped. I wanted to get us out there and play the new songs a bunch of times before we forget how to.

“I think on this tour we may even have a Pam Berry on a couple of the dates too. It’s basically the core band from the new album, which I am delighted about.”

It’s been a matter of some regret for many that a staggering four years have passed since debut ‘Good News’ was released. Not surprisingly it’s a record that Dan looks back on with pride.

“I don’t listen to it much at all but on the few occasions I have heard it since I have just counted my blessings. It’s not a perfect album but most of the songs are still meaningful to me and I am grateful some people took it to their hearts and spread the word.”

For the last couple of years, several blogs (including MPT) have traditionally started the New Year by anticipating a new WH LP in the coming 12 months. And been disappointed!

However the wait finally appears to be nearing its end as Dan announced on Twitter last week that the second LP is finished. The delay in following up the debut is clearly something that has frustrated Dan. But one reason that has not figured has been a lack of songs as 2012 produced two excellent WH E.P.s and live shows have regularly featured other new songs. Dan confessed it’s not easy to say why it’s taken so long to get to this stage.

“Too many reasons to go into here! Something to do with too much life and not enough money.”

Given that the album seems to have been so long in gestation, the final record has emerged in a remarkably short period of time. Dan explains that everything came together at the right time.

“I cherry picked this band about a month before we went into the studio because I knew it would be possible to make the record I dreamed of with those people and then we started working on the songs I had.

“I also waited until I could work with Tony Doogan, because he was the producer I really wanted to work with. It took about a month in the studio, on and off. I was lucky in that every guest I wanted to contribute to the album said yes. I had about 15 songs almost finished when we went in and we recorded 12 of those.”

The continuing success of ‘Good News’ has undoubtedly created a level of anticipation about the second record, but Dan reckons that the best approach to that situation has been to sidestep that anticipation.

“You can’t let yourself get too hung up about stuff like that or you’d start writing songs like politicians draft policies and you would forget what you know to be true. I do hope these songs mean something to other people but it’s not something I really think about too much.

“I’d love to reach a bigger audience with the new record so I can keep doing this but hopefully not too much of a different audience, as I really quite like the audience I have already.”

Once the tour is out of the way, Dan’s energies will be focussed in the one direction.

“Making decisions for the album release! I need to choose the right thing and there is a plan for a USA release but things in UK as usual are less clear.

Dan, we’re going to hold you to that!

Withered Hand have the following dates lined up during October: