It was something of a miracle that last night’s Book Group E.P. launch made it to the starting blocks at all never mind that it ended as something of a triumph. Not only were technical problems with the PA only resolved at the last possible minute but Scott was suffering from a “super-infection” and I don’t think I’ve ever seen anyone look quite so sick when playing a show before.

Show opener John from Virgin of the Birds didn’t suffer from any technical glitches and delivered an enjoyable solo set. I need to get round to listening to the LP. 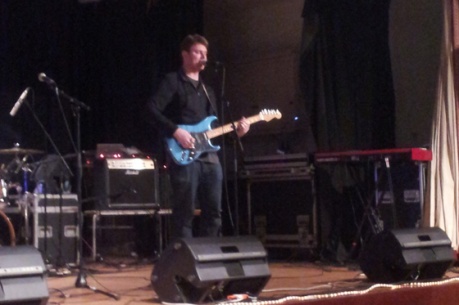 Virgin of the Birds

Pronto Mama had an unusual line-up with three keyboards and auxiliary brass but their first couple of tunes were almost drowned out by the main singer’s guitar. Then the drum kit started moving although the singer managed to deliver a couple of solo tunes to keep things moving whilst ballast was added to the kit behind him.

I wish I’d enjoyed them more after all the work to keep the show on the road but I’d have to confess that nothing from the set particularly grabbed me.

Jesus H Foxx had the opposite problem with Michael’s guitar inaudible for the opening three songs. But it didn’t detract at all from an excellent set which perhaps surprisingly featured only a couple of new tunes. However I definitely got the impression that they sounded rather more direct than I recalled from the last time I saw them live.

The headliners themselves weren’t immune to the evening’s sound problems with opening tune ‘Best Regards’ a bit of a car crash with exceptionally loud guitars then Graeme’s vocals disappearing completely at one point.

Fortunately it was onwards and upwards thereafter and as promised there were a few surprises. First off fifth Bookie in the shape of (I think) Ian Turnbull came on to play a piano intro to what turned out to be traditional set closer ‘Victory Lap’ – but as early as third song in.

With the sound settled by that point, the set got better the longer it went on with the double punch of ‘Lowdown’ and ‘Here Is Too Near’ an excellent way to finish.

There were a couple of new tunes too most notably encore “This Is How Starts” which was very un-Book Group like with a very rock’n’roll piano throughout and Graeme prowling the stage to deliver a lyric which sounded a bit like it might be a sequel to ‘All My Friends …”.

All things considered it was never going to be the best Book Group show ever so the fact that it was as good as it turned out to be was indeed a triumph.

Book Group’s next engagement is a headline show at the Cool Cat Club at Beat Generator Live in Dundee on Saturday 24th May with support from STOOR, Cancel The Astronauts and Marley Davidson. [More info]