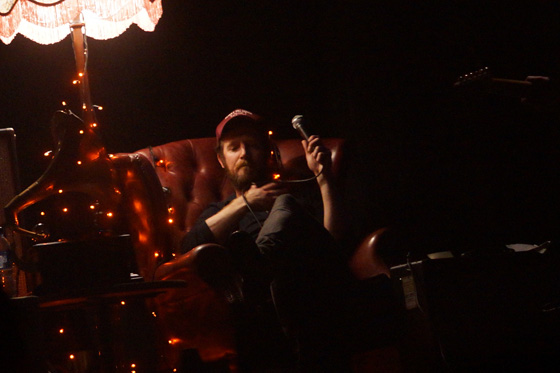 Phantom Band live outings have been rare since the release of ‘Strange Friend’  so the Skinny curated Pleasance Sessions appearance on Saturday night definitely fell into the ‘do not miss’ category.

It turned out to be quite a different experience from last time I saw the band in Aberdeen in June.

The biggest and most crucial difference was that the sound was excellent. Unlike in Aberdeen there was a real clarity which meant that the keyboards (AWOL that night) were present and correct.

Whilst the main theatre at the Pleasance has an old music hall charm, its biggest drawback is that it’s all seated.That was a problem because it’s pretty much impossible to fully enjoy the Phantoms whilst sitting down.

It was also, at just over an hour, a comparatively short set so the number of old favourites was cut back slightly whilst, disappointingly, half the new album was also jettisoned.

If the ‘Strange Friend’ material sounded just as good as the old classics, the standout for me was still a wonderful, euphoric version of ‘Throwing Bones’. Meanwhile the live evolution of ‘Crocodile’ continued with a version which seemed to be focusing on the groove in the song.

A couple of weeks ago, I was clear that this year’s live band of the year nomination was settled. After Saturday, I’m not sure I haven’t, maybe, jumped the gun on that.

A further chance to change my mind will take place on Thursday 11th December at Non-Zeros in Dundee.

Birdhead had opened the show with an excellent half hour set. It was the cleanest sounding set I’ve seen them play and, like the headliners, it sounded fantastic.

There didn’t seem to be a large number of folk in the theatre when they started but the crowd grew steadily throughout the set. And, if you’re out to make a good impression then the likes of ‘Tourist’, ‘Time Lag Accumulator’ and ‘Dronebone’, are a good way to do it. Such that by the end of their set Birdhead had a sizeable and appreciative audience.

All kudos to Remember Remember for carrying a lot of their melodies on a xylophone but my overriding impression of them was that they were … nice. Serious but nice and that’s not really enough for MPT.

Perhaps the slot did them little favours, placed between two such exciting live bands, but then again I suppose that I can’t love everyone and it seems that Remember Remember have slipped through the cracks.

Photos of all three acts can be found here.