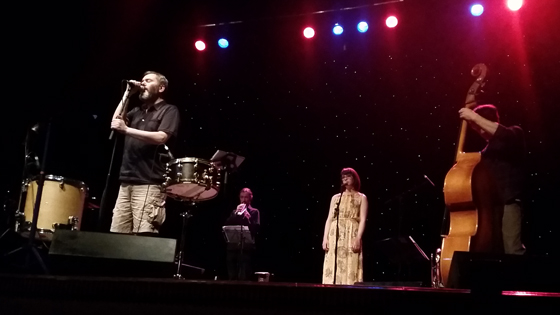 Being honest, the perfect location to see Bill Wells & Aidan Moffat is probably a smoky back street jazz club in Paris in the 1950s. However, short of someone inventing time travel, then the ambience at the Carnegie Hall in Dunfermline isn’t a bad modern day substitute. It’s a lovely old hall whose only drawback for this show is that it’s quite large.

Last Friday was the first time that I’d seen Bill and Aidan backed by three further musicians (other than for a handful of songs from the back of the packed Oran Mor a few months back.) On this occasion the unconventional line-up included long standing live cohort Robert Henderson who played some heartbreaking trumpet whilst newer recruits Stevie Jones and Danielle Price contributed double bass and tuba and backing vocals respectively.

There was a heart breaking, poignant beauty to songs such as ‘The Copper Top’ and ‘The Tangle of Us’ whilst in comparison the likes of ‘(If You) Keep Me In Your Heart’ and ‘We’re Still Here’ were quite uplifting. Judging by the reaction ‘Glasgow Jubilee’ was the crowd favourite although MPT had ‘This Dark Desire’ as one of his favourites.

There were couple of long mid song pauses in the set. Aidan actually seemed inclined to stretch out the break in ‘Vanilla’ indefinitely – until the bleep of a mobile phone prompted him to restart the song. And the pause at the very end of ‘Street Pastor Colloquy, 3AM’ proved unbearable for one audience member who prematurely yelled out the last word – much to Aidan’s surprise and bemusement.

Although I wasn’t counting, the set seemed to draw more heavily on the first LP than the second but disappointingly there was nothing from the excellent new E.P. Having said that, given the line-up of the band, it would have been hard to recreate the disco magic of ‘DILF_77 …’ on stage! 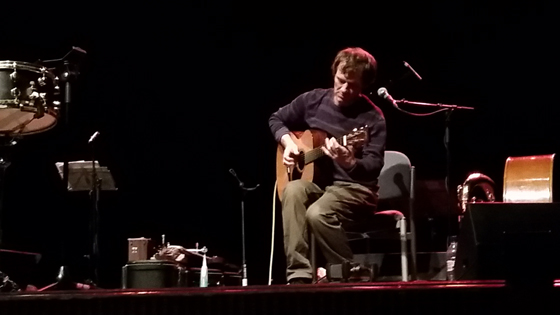 The show had been opened by Stevie Jones in his Sound of Yell guise but I have to confess it rather washed over me. Despite that it was a technically impressive show not just for his skilful acoustic guitar playing but also for the creative way in which he created drones (yes, that’s an electric toothbrush you can see in the picture.) I suspect that the album would interest me more but just having the guitar out front wasn’t quite enough for me.

Finally a word about the audience. Fife tends to be starved of high quality indie acts so in that light it was a slightly disappointing turnout ( to be fair, though Bill and Aidan had already played Kirkcaldy the previous month). But what the audience lacked in numbers they more than made up for in enthusiastic but respectful appreciation – the quieter songs were perfectly respected and never marred by interruptions from the stalls.

Bill and Aidan’s 2015 LP ‘The Most Important Place In The World’ and new 5 track E.P. ‘DILF_77 Would Like To Chat’ are both available from Chemikal Underground and all good record shops.