Being honest our attendance at this show was as much down to MPK2 wanting to see Broken Records again as anything else. However with Adam Stafford in support a deal was struck to attend the show.

As ever it wasn’t a good idea to take any expectations as to what you might expect Adam to play. The only real guarantee is that the show you’re about to see will be different from the last one.

I suspect our late arrival meant that we missed the first number but what we did see was Adam at the more abstract end of Adam’s spectrum. The show that came closest to the feeling of this one was the guitar-less Aberdeen slot supporting the Phantom Band a couple of years ago.

So there was only ‘Railway Trespassers’ from the current album and no pop tunes this time at all. Instead we got three long-ish hypnotic instrumentals, at least two of which are destined for his next record. It was as intriguing as ever. 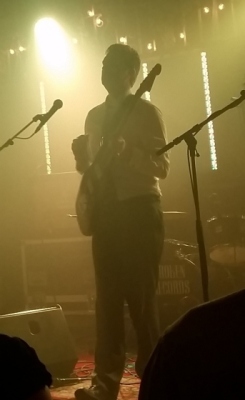 It turned out that the headliner’s set was a tenth anniversary celebration of sorts. Accordingly, their set ranged from their earliest material to songs for the forthcoming fourth album.

I’ve always had a slightly tangential relationship with the band. I must confess I’ve not been totally blown away by either of the albums that I’ve heard and the one time I’d previously seen them live I lost a bit of interest through a lengthy set after they played the material I knew best early on.

But that definitely wasn’t the case with this show as they were impressive from the off.

I’m most familiar with the last album so two of the definite highlights were ‘Winterless Son’ and the closing ‘I Won’t Leave You In The Dark’.

But the band never really dipped in their 75 minutes on stage and they demonstrated a real variety of material from the epic to the intimate.

I needed Adam’s support slot to persuade me to go this time but next time I’ll gladly go with MPK2 just to see Broken Records.