After the comparative disappointment of Sunday if there was one thing that I was hoping for in Wire’s set on Monday, it was have been subtlety. And that’s what I got as I moved from the show I’ve seen Wire play with the worst sound to the show with the best.

Everything seemed much more focused either whilst at the front taking photographs or (much) further back thereafter but the whole, career spanning, set felt so much more cohesive than the previous night with the new songs in particular shining.

Yet the better sound (and reduced volume) didn’t deny the band any power – the closing ‘Over Theirs’ remained one of the real highlights whilst ‘Underwater Experiences’ benefitted from the clarity. There really was no down-side. 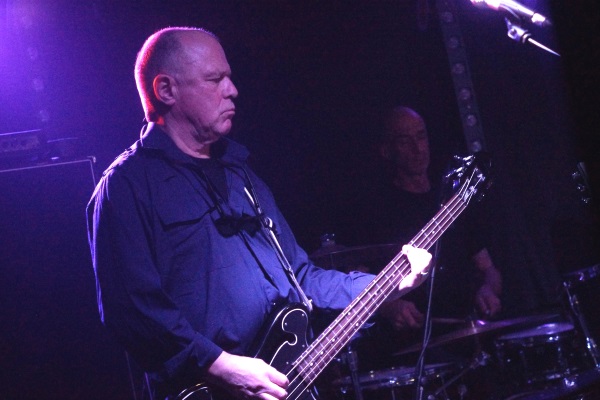 It certainly wasn’t a comfortable experience though. There was curiously a bit of space around the stage (at least whilst I was there for the first few songs) but I don’t really like standing so close to the stage when others are much smaller than I am. But finding a comfortable spot further back was well on nigh impossible as, even with the crush, there were folk standing outside the doors of the venue. Oversold? More than a little.

Perhaps surprisingly the shout for the punk number came in Edinburgh rather than Dundee but the request for ‘12XU’ was dismissed by Graham as “That wasn’t witty in 1977!”.

The other audience incident of note was Graham returning to the stage for the encore to find that someone had lifted his setlist. The culprit rather sheepishly pushed his way forward to return it – before the band played the encore they’ve been playing almost every night!

Finally, on the audience, it was a surprisingly diverse bunch. Certainly, there were a number of the older guard but there was also a big swathe of much younger people. Which in itself is testament of the band’s continuing relevance as they do everything possible to remain a contemporary, rather than nostalgic, act.

Some photos from the show:

The gallery of photos from the two shows in Dundee and Edinburgh is here.