This was a bit of a rum evening. By the time the return of Billordo to Dundee was announced we’d already booked tickets for the climax of the ReImagination mini-book festival in Glenrothes – a performance by Fun Lovin’ Crime Writers – the covers band made up of 6 crime writers.

As luck would have it, timings made attendance at both events possible even without having to rely on the second event runing late. So it was two VERY different performances in equally differing venues.

Any review on here of a venture like the Fun Lovin’ Crime Writers is essentially redundant. Well, even MORE redundant than usual. But let’s face facts -nothing I write is going to persuade anyone that they do (or don’t) want to see the band .

The question then is how much fun it was. And you know what, it was plenty fun!

Being frank if it had been half a dozen writers playing at being musicians for a laugh it would have had limited appeal. But the FLCW are fortunate to have a core of members who have varying degrees of musical pasts which means that their starting point is from a far higher level than you might expect.

The set was largely based around the theme of crime (although, for some reason, werewolves got a look in late on) and they even played a handful of songs in my own collection. Of those an early shot at ‘Watching the Detectives’ was probably the most successful but other highlights included ‘Werewolves of London’ and ‘Blockbuster’.

All in all it was an enjoyable romp through a set of largely well-known songs even if they’re all pretty old. ‘I Predict A Riot’ I think was the only song originally recorded in the 21st century, which probably reflects the demographic of their audience perfectly.

Myself and MPK2 took our leave at the end of the main set and I was left carrying two thoughts on the way out.

Firstly, a pick-up band of crime writers can play for more than an hour and a half whilst many professional bands of a similar vintage to the writers sometimes seem to struggle to get much past an hour. And secondly there were more than 250 people at the show.

As one of the bands covered on the night once sang “the public gets what the public wants”.

A quick dash to Dundee brought us from the comparative grandeur of the Rothes Halls to the dingy basement that is Conroy’s in time for the closing chords of the “Muppey Mooley” set. Which, whilst negligible, was still more than I’d expected to hear of the recently reformed Mule. But it did mean that we were in plenty of time for the headline act and the Argentinian lo-fi troubadour delivered.

Never before surely has one man and a guitar been so mobile whilst perched atop a bar stool. Billordo’s set was largely familiar from his last visit (and his previous EP) although if anything he delivered the songs with even more gusto than last time.

Every now and again he would leap from his stool to sing from the audience – initially on the Spare Snare covered ‘No Quiste Angustiarte’. On his previous visit during these excursions he managed to engage the audience in singing along to songs in Spanish and did so again although, if I remember correctly, to different songs from last time. Fair to say that it’s unlikely that a Dundee audience has ever sung ‘Ginger, Lemon, Superstition’ before with such enthusiasm.

There’s really something heart-warming about a singer travelling so far from home yet, through his enthusiasm and personality, managing to communicate on a visceral level with audiences despite the language barrier. Truly the power of rock’n’roll.

So all in all a “brah” evening.

Previously on MPT – Billordo interview (May 2018)

Some phone pics from the Billordo show: 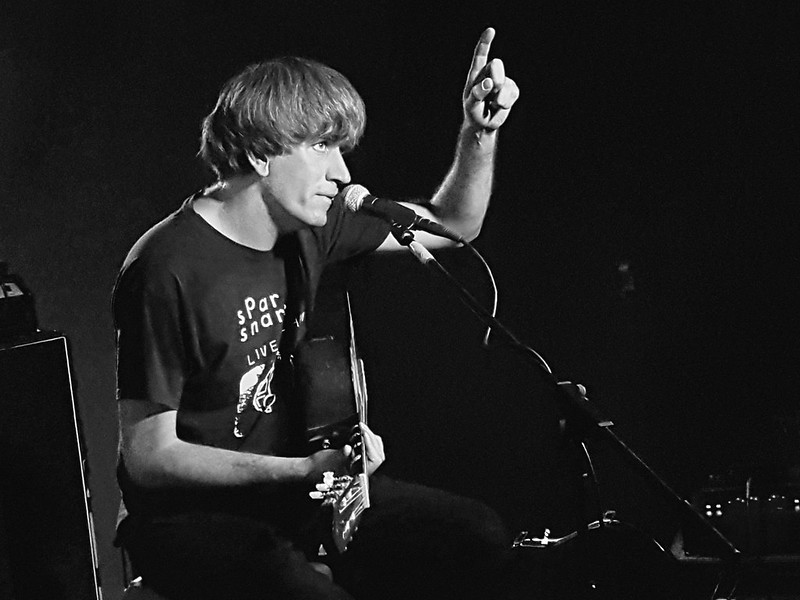