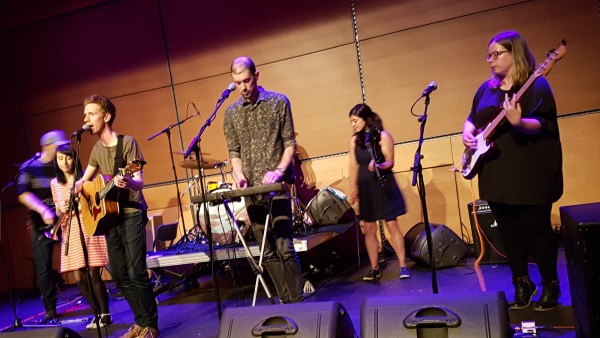 It’s not often that the songs of one of your favourite bands get made into a musical, certainly if the aforementioned band are not a global phenomenon. So we weren’t going to pass up the chance to see ‘The Isle of Love’, a show developed by Right Lines around the songs of Randolph’s Leap’s Adam Ross.

With a slightly odd touring schedule that took the show to a lot of out of the way places largely by-passing the central belt, the performance at the CCA in Glasgow seemed to offer the best opportunity to see the musical – with the added bonus of a full band Randolph’s Leap set thrown in.

Based around a Highland island, the show explores the arcs of characters who are all drawn to the titular island for different reasons. So Harry arrives on the island in a quest for a simpler, back to nature existence, whilst Bob and Sue are on a holiday to try and repair a failing relationship.  On the other hand, Catherine and Jane have prior connections to the island.

For a comedy, it has some surprisingly dark moments taking in both suicide and domestic violence but I don’t think it’s giving too much a way to report that everyone resolves their issues by the end. However, the island functions more as a place of healing rather than being the final destination for the characters.

The talented cast were strong throughout and included a familiar face in Kevin Lennon, who we’ve seen perform for many years at the Dundee Rep (usually in the panto). John Kielty, as Harry, though got a lot of the best lines whilst the special effect Cal Mac ferry had to be seen to be believed!

Given the nature of Adam’s lyrics I did wonder how a story could be woven around them and whether they might need to be changed to suit the story. However other than ‘I Can’t Dance To This Music’ I didn’t notice many rewritten words at all.  And whilst the various storylines occasionally veered towards the cheese the interwoven storylines held together remarkably well.

But any musical depends on the quality of the songs and there was no doubt that Adam’s hook laden tunes were a perfect fit for this type of show. They were also sung in a variety of ways, sometimes by Adam himself as a musical narrator but more often by the cast both as solo pieces, group singalongs and occasionally even as duets.

Whilst Adam was signed up to provide the music for the show the rest of the cast turned out to be talented musicians. The five actor/musicians often swapped instruments depending on who was singing, and they provided a far more robust backing than I might have expected beforehand. I’m looking forward to the Original Cast recording!

The arrangements therefore featured at different times guitar, bass, keyboards, fiddle and banjo and emphasised not just the lighter side of the songs but also their enduring pop nature.

Since the show was written a couple of years ago, the songs used all pre-date 2015 or so. Which meant that there was an opportunity to hear songs which rarely, if ever, feature in the live set these days including ‘Deep Blue Sea’ and, Mrs MPT’s favourite, ‘Going Home’.

It was an entertaining show and well worth the trip through to the West. The run is now over, sadly, and I’ve no idea if it will ever be revived. I’d like to think it would but the financial realities of such a production perhaps make that unlikely.

After a fairly lengthy wait (the stage had to be cleared and the band set-up from scratch), a seven-piece Leap finally took to the stage. Whilst a number of the songs from the show were given a second (if not third) airing, there were also a couple of tunes from the new album ‘Worryingly Okay’, as well as a couple of older ones such as encore ‘Crisps’. And the even newer ‘Big Momma’s House’ sounded every bit a Leap pop classic.

The band’s numbers were even swollen to 12 at one point with the cast of TIOL joining for backing vocals, dancing and various mid-song photo opportunities, which all contributed to the evening’s sense of fun.
All in all, it was a pretty special night. 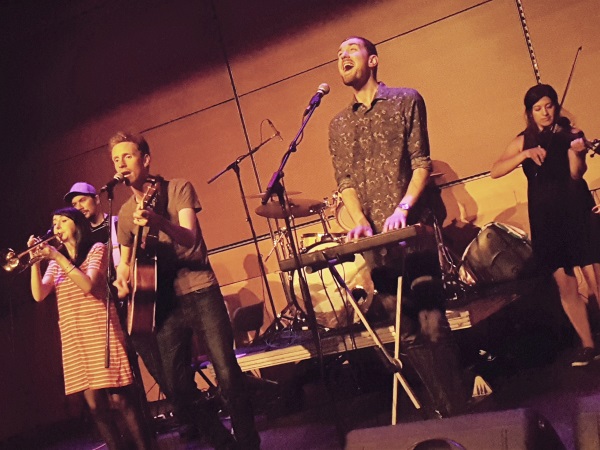 Here’s a video of a couple of songs from the post-show gig, complete with four members of the cast on backing vocals and dancing: