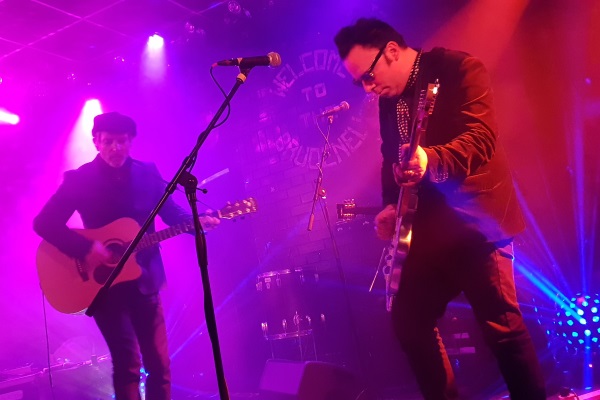 Although we’d seen the Mercury Rev ‘Deserter’s Songs’ acoustic tour earlier in the year, a couple of days in Leeds fitted in perfectly with Mrs MPT’s birthday giving us the excuse to take in the second Leeds show on the Friday night.

This tour was billed as a chance to hear the songs the way that the original demos for the album were recorded – fragile and hushed. So, with one notable exception, there were no drums but my feeling was that this was actually a quieter, more haunting set than the one we witnessed in Stirling in April and certainly the audience provided a suitable reverential atmosphere throughout.

At only twelve songs, it might look like it was a short show but in fact it lasted for a full 90 minutes. There were two reasons for that.

The first half of the set featured almost as much story telling as music but, even when Jonathan stuck to playing, the songs, particularly in the second half of the show  were stretched out even if not to the lengths that Jonathan claimed the songs had originally been demoed. Allegedly many of the songs lasted for 45 minutes in their original incarnations!

Apparently the default way to end most of the songs at the demo stage had been feedback. But whilst many of these psychedelic passages were preserved, if not at excessive length, they were played with restraint, matching the tone set by a funereal ‘Funny Bird’ which started the show.

. There was just the one in which the volume was turned up – a drummer arriving for ‘Opus 40’ as the band exploded. Despite the reduced line-up it was as transcendental as ever. You can only play so much acoustic guitar as Jonathan remarked!

Surprisingly, it wasn’t quite the finale as ‘The Dark Is Rising’ (omitted in Stirling) brought the show to a satisfying conclusion. One other bonus of the show was that we managed to pick one of the nights that ‘Car Wash Hair’ was aired, another of the songs to match the length of the ‘98/’99 versions if not the intensity. [Setlist]

The support on this leg of the tour was another reprise – Nicole Atkins had opened for the Rev on the ‘Light In You’ tour a few years back.

Again performing solo, her set sounded more country than on the previous occasion. She’s got a wonderful voice and good stage presence and even managed to deal with someone talking through one song with both tact and firmness.

Whilst we don’t put all our eggs for these trips in the musical basket, I’d had a little worry that the Rev show might not have been as interesting second time around. If anything, I probably found it more engaging than in April and there’s no doubt that the show would have been worth the trip on its own. A nice break as well was a bonus!

Here’s the version of Opus 40 from the Thursday show in Leeds: