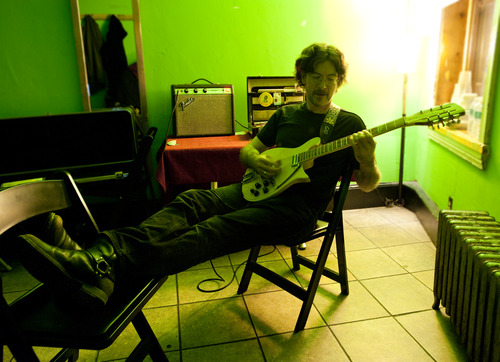 This one is out of the blue. The song that stood out for me on the latest Uncut CD was ‘Dream Song’ by Chris Forsyth, taken from his forthcoming LP (12 April) ‘All Time Present’.

‘Dream Song’ very much puts me in mind of Steve Wynn stretching out one of his heavier numbers.  I think it had pretty much sold me the album on its own but there’s also a double A sided single out last month and the two single tracks are just as good if a little different.

I hear all sort of different influences, perhaps particularly the Verlaine/Lloyd axis of Television so it was  no surprise to discover that Chris had studied music and guitar with the self same Richard Lloyd. Interestingly, a previous single ‘High Castle Rock’ sound like it’s coming from very similar territory to Rod Jones of Idlewild in one of his more expansive moods on something like ‘Use It’.

Can’t find a version of ‘Dream Song’ online yet, but taking the three tracks together  I’ve pre-ordered the album.

Here’s the shorter of the two single tracks: