I’m going to keep banging on about STOOR frankly until someone makes me stop. New album ‘Fleam’ (out now on Stereogram!) is destined to be one of the albums of the year so last weekend’s launch show had been written into the diary, circled then underlined,  the day it was announced.

There’s a slight change in emphasis to STOOR live. Not that the guitars are buried on the records at all but live the interplay between Ross Matheson and Davie Young is really brought to the fore. It’s a strand of rock music that MPT loves, whether it be the twin guitar attack of That Petrol Emotion, the exhilaration of Blue Aeroplanes in full flight or the layering of guitars courtesy of Band of Susans. And truly STOOR deserve to be talked about in that sort of company.

The show started in conventional enough fashion with five songs from the new album crammed into the blur of the opening 6 numbers, the exception being ‘Lychen’ a new one which has been aired previously. It’s a run of songs that well demonstrates the strengths of the record – from the opening  instrumental ‘STOOR Theme’ through current single ‘Atrocities’, to potential single ‘Lovebombing’ to STOOR illustrated their knack of combining of melody and dissonance to great effect.

But whereas most others bands would then have mixed the best of the new record with old favourites STOOR took a typical left turn with a  run of no fewer than 5 new tunes. Five.

I had a notion that I might have heard 1 or 2 before but getting a handle on a such a welter of new material in one go wasn’t easy. Suffice to say that one could almost have been a punk song whilst another visited the sort of expansive chaos so beloved of Sonic Youth.

But even STOOR won’t finish a headline set with new songs (although, admittedly, they might well view that statement as a challenge !). So it was back to more familiar territory with scorching versions of the two closing tracks from the record, ‘Unlike Them’ and ‘Chivers’, which seem almost designed specifically to close a live show.

Fourteen songs then and not a single one from the debut. But ‘STOOR’ was finally revisited in the encore with ‘Witchfinder General’ and ‘Sure Beats Me’, probably the most enduring songs from that record. And STOOR being STOOR, the latter provided the necessary symmetry by ensuring that the first and last numbers were both instrumentals.

I’ve been positive about this band for years and there seems no chance of that letting up. Never ones for standing still they continue to be propelled onwards by a desire to better what they’ve done before. And honestly they’re as good as they’ve ever been, yet there was enough in the new songs to promise there’s much more to come.

Support came from Simon Reid and A Hooker Without Jesus.

Simon had opened one of the Christmas shows a few years back and his diverse acoustic set swung between the extremes of the black comedy of neighbour eating neighbour after a No Deal Brexit and a tribute to Scott Walker. Entertaining stuff.

Andy’s short opening Hookers spoken word set covered largely familiar ground with the newest piece being his Mark E Smith tribute from last year. The only slight disappointment was that, this time, there was no freeform Mike Kane guitar to back him!

Encore
Witchfinder General
Sure Beats Me

Gallery of pictures from the show: 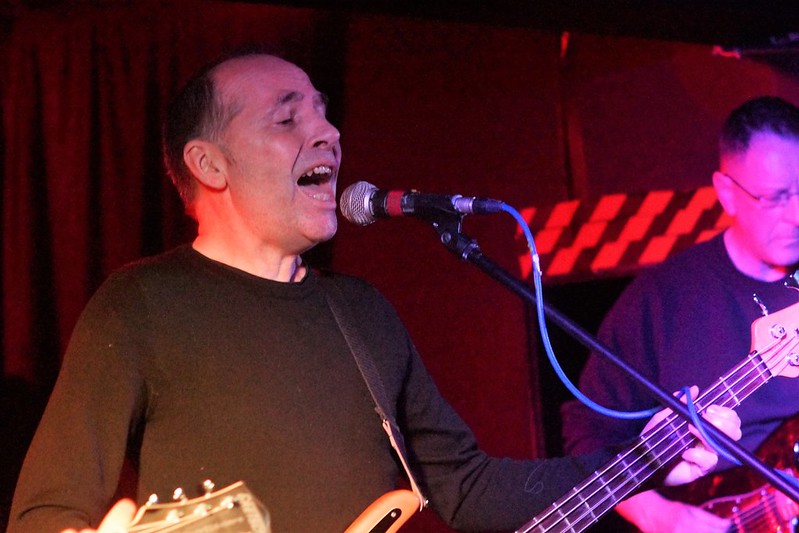