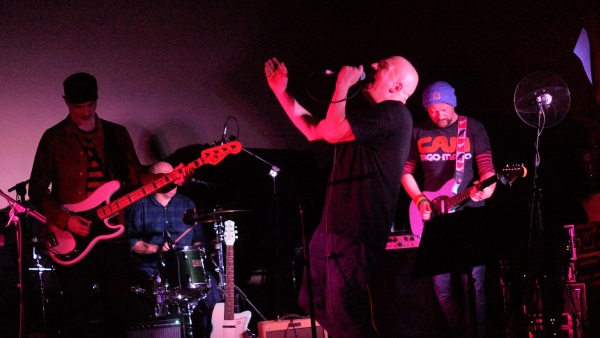 Spare Snare have been pretty active by their standards especially with the release of the Steve Albini produced Sounds in 2018. Dates to support the album included a particularly special appearance at a show promoted by Manic Pop Thrills and The Cool Cat Club in January 2019 which was a wonderful night for all involved.

Sounds revisited the very different aspects of Spare Snare’s long and fruitful existence and the resulting album and shows were spectacular. That said, for me a new Spare Snare record or show are always something that I anticipate with great excitement.

Over the weeks of lockdown Jan and some of the other members of the band have been holding listening parties via Twitter, working their way through an album week from the latest, Sounds, and finishing up with 1995’s fantastic debut, Live At Home. There are more details in the interview if you feel like joining in the fun. For now, I’ll put you in the capable hands of Jan Burnett. (AJW)

Doing alright. Plenty to get on with, and as a Key Worker, I’m still getting out which has its pros and cons.

How has the lockdown affected you personally?

It maybe helps I am an only child. I’m happy not to be that sociable, but will also be very happy to meet up with folk for a pint once this is all done.

I feel for my daughter, she’s 13, and is dealing with it incredibly well, so far. She is very active and so the double bed is now some kind of gym kit. Funnily enough a trampoline arrived today. We’re lucky enough to have a garden. Looking forward to building that.

As a musician, has it directly affected you and in what ways?

Because we don’t play very often, it hasn’t affected us in terms of income. It’s given me a chance to pull out some keyboards and electronics and do some doodlings. Not sure it will ever be ‘released’ but it was good for me to do. Still work in progress. It’s a little rave, a little prog, a little jazz. I’m not sure what’s come over me. I’m not sure it’s an official Lockdown type album as I had been planning on doing it anyway. Some of the band have been forwarding me rough sketches for future Snare stuff. I need to get in the right headspace for that. Hopefully soon.

There have been a lot of artists and performers finding ways to connect with their audience. How have you, if you have, engaged with people and how did you find the experience?

I ripped off Tim Burgess and am doing a weekly twitter #sparesnarelisteningparty (Monday evenings 8 pm BST).

I let him know, he was cool with it. Working backwards from Sounds. It’s interesting hearing some folks questions and what I have to say about tracks. Some of the band chip in, they don’t all have Twitter.

We won’t be doing a Zoom type fund raiser. It’s not really us.

What tips do you have or what things do you find useful in keeping yourself going during these strange times?

Have a project, whatever that may be. You may know I’m a collector (some say hoarder!), so I was A to Z’ing thousands of CDs last week. I put the doubles up on ebay.

Have you taken on any new challenges or routines during lockdown?

Not really, though not disturbing the family when I get home from work as they are working from home and doing school homework was clear early doors. That’s when I go and do my thing for a couple of hours, then we all meet up for dinner. Sounds like the Waltons. 😊

What music, books, films, art or television shows have sustained you through lockdown?

Finally getting Homeland finished. Trying to watch a film / DVD very couple of days. Educating my child with decent films. The new Grayson Perry art series seems to be good and funny. Killing Eve, obviously. Loads of music. I have a box of CDs I want to hear, so working my way through them.

What are your hopes for a post-lockdown world?

That the government realizes they need to sort out the NHS, Care Home and Care funding. If that was the one and only thing to come from this, that would be amazing.

Anything else that you would like to add or say?

Stay safe. Come and see us next time we play.   Cannot wait to play a show or two. Here’s hoping we finally get the opportunity to do a festival or two next year as well.

Previously on Life Under Lockdown