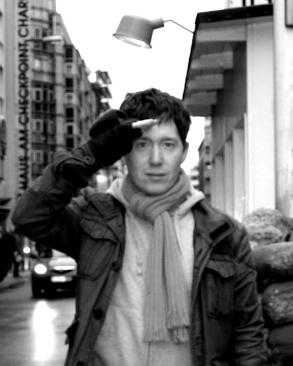 It’s always nice to be surprised and with their two releases that I’ve heard to date King Post Kitsch have managed to do just that. After I’d posted a couple of positive reviews about the ‘Don’t You Touch My Fucking Honeytone’ EP and ‘The Party’s Over’ LP, KPK mainman Charlie Ward got in touch to thank me for the reviews. Which was a bit foolish because he ended up getting asked to do the following interview!

“KPK was originally just myself, studying and messing around in London, recording some songs till one day I put out a free EP online and thought I should get some sort of band together. Since then a few people have come and gone, but I’m still here.”

The EP and LP were both released on Song, By Toad Records. Although it’s a little tenuous since it’s not clear that there is such a thing but KPK do seem a little ‘off piste’ as regards the normal Song By Toad sound, since there’s not an obvious folk influence. But as Charlie explains the reason that ‘The Party’s Over ‘ ended up on Song By Toad was fairly prosaic.

“After my first EP was reviewed on the Song, By Toad blog, I kept in touch with Matthew (who runs the blog/label) and after another EP was released he offered to put out an album. I was a fan of the blog/label for some time so it felt like a nice fit to me.”

Whilst Charlie has been writing and recording songs for KPK for several years, the EP and LP resulted from a burst of creative activity.

“It was written and recorded fairly quickly, the bulk of it around October/November. I do have a habit of leaving things for a long time to settle though. So although the writing, recording and mixing parts don’t take long, I like to put 2-3 weeks between each stage to try and get some sort of distance from the music.”

The creative process however left Charlie with something of a dilemma – what to put on the LP. He admits that choosing songs to be left off the LP wasn’t without some pain.

“Well I had around 16 songs in total for the album. I tried many different track-listings as I wanted to include ‘Alaska’ but it just didn’t fit. Around this time the label though it would be a good idea to release an EP, so that was a good way for me to put together two releases that felt complete rather than just picking the best ten songs for the album.”

The result, of course, was not one but two excellent records, each with their own character. I asked Charlie what sorts of things, musical and non-musical, inspired the songwriting and making of the record.

“Just where I live really, walking around London watching people. The same in Glasgow. I don’t really listen to much music around the time I’m recording either, so film and books probably have as much an influence as anything.”

If the party is indeed over, Charlie, what was it like and who had a good time?

“Ah, well that was the title one of the songs that was dropped. I had a song called The Party’s Over which was going to end the album. That then became the album title after I saw a friend’s photograph which I thought would match it perfectly as the album cover.”

Although KPK has largely been a singular project for Charlie the prospect of getting out for some live dates to support the record appeals.

Thanks to Charlie for taking the time to do the interview by email. You can get the EP and LP from Song, By Toad Records here.

And here’s a video for the latest free single from the LP: