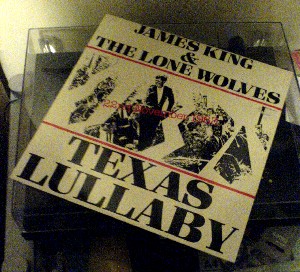 The Great Jock’nroll single poll is going to end on 28th February. Perusing the list of bands you can vote for threw up a lot of possible candidates for blog entries and, given that my last posting was on a largely forgotten Scottish band, I thought I’d pick up on an even more obscure band who played one of the best gigs I’ve ever seen.

James King and the Lone Wolves were certainly a name I recognised from the Glasgow gig circuit in the mid 80’s even though they were someone I didn’t hear for a while.

Two singles credited to King (no Wolves) appeared on Fast Product in the early 80s but were not successful.

King’s moment though seemed to have arrived when he released the ‘Texas Lullaby’ five track EP in 1983. With an increased focus in the press on new American bands such as REM, Dream Syndicate and Husker Du, his timing seemed impeccable. Reviewing the EP for Melody Maker, I recall Billy Bragg saying that if the record had been issued by a band from the Southern States of America it would have been hailed as the future (he may actually have said furniture) of rock’n’roll.

The Lone Wolves then signed to Allan Horne’s Swamplands label as their profile continued to increase and a single, ‘The Angels Know’, appeared on that label. All the signs seemed to be encouraging that, at long last, there would be a Lone Wolves LP.

First of all there was a UK tour and the Glasgow show at the QMU was simply awesome. Blasting through their 13 or 14 song set almost without pause (and with no encore), this was a show with attitude. No banter, no song titles yet the whole show was superb despite the fact that they only played 3 or 4 songs I’d heard before.

At the same time there was also a decent amount of press and even TV exposure via an appearance on the Old Grey Whistle test (on YouTube now) and on Studio One In Concert , a Border TV show covering Scottish bands, which broadcast six or seven songs in a half hour slot. However the album, supposedly produced by John Cale, never materialised.

‘The Angels Know’ was therefore, as far as I know, the last Lone Wolves record. King later put together another band, Fun Patrol, which released an excellent 12” single in 1987. Other than the very occasional live sighting that has pretty much been it.

I can’t help wondering what he might have achieved had things been slightly different. From the ‘Texas Lullaby’ EP, here’s the title track.

Your best bet for tracking down James King other than eBay seems to be a live video from 1985 which can be picked up here and there. I didn’t know about it until a couple of days ago but I’m on it now.